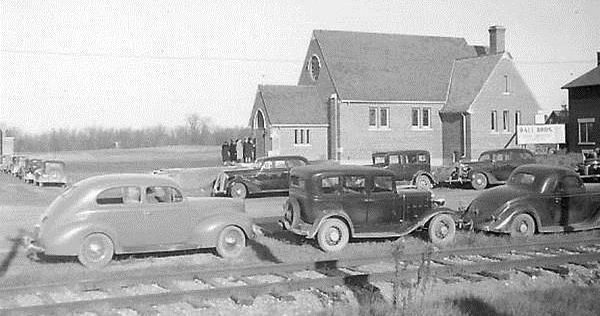 The celebration of our church family began on Christmas Eve 1939 in a rented house, with fifteen people attending. Within a week, a Sunday Church School program was organized with 24 students and teachers. It was felt that this mission congregation could serve the growing population on the east side of Kitchener – and grow it did.

On September 8, 1940, St. Luke’s was formally organized. Rev. Homer Berner was called as the first pastor of the congregation.

Looking toward the future to continue its ministry, land was purchased at the corner of Delroy and King Streets for the construction of a new church. The groundbreaking service was held in June 1941, with the dedication of the new church that could seat 140 members in November of that same year. By its 10th anniversary, the congregation’s membership had grown to 347 baptized members.

By February 1955, the membership had grown so large that the Sunday School classes were held at Sunnyside Public School. With the congregation continuing to outgrow its current facility, construction of the current church on Franklin Street was begun. On November 11, 1962, the last service was held at the King Street location. On March 31, 1963, the original 1941 cornerstone and the 1963 cornerstone were laid at the new church. On May 1, 1963, the new building of St. Luke’s was dedicated.

As the congregation continued to grow, thoughts turned to an addition to the current church building, which included a fellowship hall. Early in 1980, construction of the addition began, with the service of dedication being in October 1980.

Throughout the years, the members of St. Luke’s have been able to carry out a ministry of Christian witness in a variety of ways. In 2015 the congregation celebrated 75 years of mission and ministry.

The baptized membership of the congregation in 2013 totaled 688.